Art that is infused with magic can be found in every culture, and has always been a vehicle for depicting and transmitting all manner of content. Art, be it simplistic or complex, sacred or profane, is the vessel and the agent. Tribal art expert Joris Visser seeks out connections between the objects in his field of specialty and contemporary art.

African traditional sculpture is like an empty canvas, it is powerless until it has been spiritually charged by medicine men or women, priests or fetisheurs. An image of an ancestor or spirit is one thing, but to make it function it needs to undergo a literal charge. In the Congo, in cavities in the head or torso, objects are charged with a combination of herbs, blood and bones to create a living, functional object that can be communicated with.

In the West, we often refer to this as Voodoo, but only in a small region of Africa, mostly Benin, do they make Vodun figures. They are based on a religious belief in mysterious forces that govern the world and the lives of those who reside in it. Vodun sculptures do not only protect humans but also empower them. Cords, nails, and bandages are prominent features of bocios and possibly reference the trauma resulting from violence suffered in the slave trade that, for centuries, affected the area of their production and use. Bocios offer a potent strategy in responding to difficulty and threatening social conditions.

Most traditional figures south of the Sahara are made to communicate and influence the forces around us, to communicate with our elders, our ancestors, not to hurt or maim but to understand and protect. 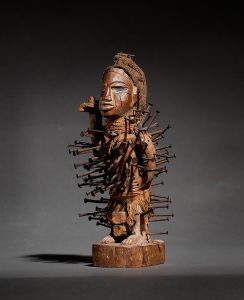 The importance of tribal art

Many Western artists have an affinity with this sense of transformation. We all know the importance of African art as used by the cubists of Montparnasse. In fact many contemporary artists have taken an interest in tribal art and the rituals of creation: Joseph Beuys used magical materials like honey, felt and fat as a shaman spiritually charging his objects: for Beuys, the artist is like a shaman; his task is to satisfy the beholder’s need for spiritual and material renewal, rather than produce aesthetic objects or the museum. Art is no longer a practice for a restricted audience, but an operation of “social sculpture” made of ideas, symbolic actions, public discussions, aimed at changing society. “It is necessary for the ego-centered man to die so he can start a new life in relationship with his material and spiritual surroundings.”

Another well-known example is the Baselitz collection, which ranges from nail and mirror fetishes from the Lower Congo region to soothsayer bowels, rag dolls and ancestral wood-carved figures from the Democratic Republic of Congo. Baselitz says he only collected pieces which interested him. He finds the figures – made or carved as part of ancient social rituals in Africa – interesting because of the great number of people who work on each individual figure: “One person carves it, then there are the medicine men or priests who turn the sculpture into a fetish figure. All the people who work on it leave their mark, and that makes it even more mysterious.”

Many artists have worked in this field of alchemistic charge. Arte Povera used traces of fire and smoke to imbue works from Jannis Kounellis. Anselm Kiefer is renowned for creating monumental artworks from lead and organic materials. Yves Klein charged sponges with magical blue, and James Lee Byars with touches of gold. Sigmar Polke’s alchemical use of materials takes the shape of painted projections of engravings by 16th-century alchemist Michael Maier. Like the shaman charges the object made by a sculptor, Polke emblazons the engravings with new life.

However, the first thing that springs to mind in contemporary art is the work of Günther Uecker, who literally works like a nail fetisheur, aiming to transcend “the silence of the elders,” as he indicated in an interview with Hans Ulrich Obrist. 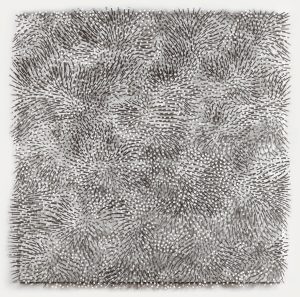 This October, Dorotheum is putting up for auction a small but very fine collection of African art which clearly shows this affinity to magical art and transformation. At the same time, the Weltmuseum in Vienna is reopening its doors after three years – a unique opportunity to visit both Events.

Jan Joris Visser is a specialist for tribal art at Dorotheum.

11. January 2021
23. June 2020
22. June 2020
13. June 2020
29. May 2020
19. May 2020
Search
Sprachen
Auctions
... and achieve the best price for your valuable works…
Brilliant Beauty A diamond ring by Bulgari: one of the…
The King of Jewellers Since its foundation in Paris in…
Enigma is probably the most famous encryption machine in the…
In the 250th anniversary year of Ludwig van Beethoven’s death,…
Rediscovery of the Human Figure Stephan Balkenhol is one of…
rigorous lines - many nuances - great refinement The influence…
THE POETRY OF THE SIGN Oscillating layers of colour, rows…
Highlights
The Sacred in Everyday Objects ‘I’m a painter: I’m a…