Vienna in the 1880s was a singular celebration of culture, life, and cultural life. Stages beckoned: a young Gustav Klimt was commissioned to adorn the walls of the Burgtheater, with magnificent results.

Boomtown Vienna in the 1880s

The theatre-loving city considered the new building for its Burgtheater a project of particular prestige. In 1886, a young Gustav Klimt – at just 24 years of age – was tasked with adorning the walls of the revered theatre. Together with Franz Matsch and his brother Ernst Klimt, he was to create a cycle of paintings in its two grand staircases, with imagery illustrating milestones in the development of European theatre. 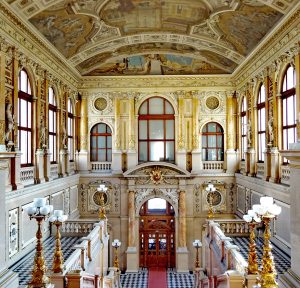 A great deal is known about the individual phases of the project. The Imperial Building Commission convened on 20 October. The “protocol agreement” for that session notes that Klimt was hired, on the basis of painted sketches, to paint a work reflecting “the
ancient theatre in Taormina” on the large middle section as well as other smaller scenes. The Commission also asked Klimt to submit a design for areas in the tympanum which had previously not been considered for decoration. He was free to choose the subject. This unusual decision could be explained by the especially challenging position and format of that particular wall space – a twelve-metrelong, but narrow arch.

The solution Klimt proposed was brilliant. At the centre of the image, beneath the high point of the arch, is an altar topped with a bust of Dionysus, the ancient god of fertility and wine. The ecstatic pagan events, ceremonies, and plays of the muses staged to worship him, are considered to be the origin of theatre. On the left-hand side is a kneeling young female nude arching her body towards the likeness of the god. She is a maenad, a companion of Dionysus; in her right hand she grips a thyrsus, a vine-covered staff associated with the god and his votaries. Reclining on the right-hand side of the altar is another female figure wrapped in fluttering white – a second servant of Dionysus. Exhausted from the “frenzy”, she holds a golden wreath of laurel inclined towards the god of wine.

Klimt developed the composition with heavy foreshortening – a perspective tool that suggests a staircase the viewer appears to be ascending. Hints of a temple appear in the background just beyond the terrace on which the altar scene is playing out; Klimt sketches its lines in the underpainting with fine pencil. In the left-hand corner is a pointed-eared satyr from the entourage of Dionysus, rendered here as a muscular male nude beating a hand drum. Klimt’s composition is both highly knowledgeable and masterfully executed; his painting technique switches confidently between fine pencil sketches, colour glazes, and lively turns to dynamic, impasto areas. The result is a tension-filled dynamic with a “deep blue Greek sky” (Nossig 1888) vaulting overhead.

The Commission approved the draft, and Klimt set to work producing the transfer drawings on cardboard, works which were discovered in the attic of the Burgtheater several years ago. They are now on view in the main foyer of the theatre.

The cardboard would be employed as part of a mixed-oil technique that would allow the artist to transfer the final image to marble stucco. Klimt made very few changes to the original image. One of few alterations made was to the reclining woman on the right. The final version shows her completely naked, making her an early anticipation of Klimt’s “femme fatale” depictions. Another change the artist made can be seen in the figure of the nude boy rendered in light colours in the background on the left. He becomes a dark patinated bronze figure in the Greek Archaic style in the final version.

Klimt’s staircase paintings were greatly admired at the opening ceremony of the Burgtheater. Emperor Franz Joseph I awarded the artist the Golden Cross of Merit, and shortly afterwards he was commissioned to paint the staircase at the Kunsthistorisches Museum. Like the Burgtheater’s magnificent staircases, it became one of the most celebrated examples of European historicism, not least thanks to the authorship of Gustav Klimt.

It is not known when the preliminary design for the “Altar of Dionysus”, executed in oil on canvas, came into collector Eduard Palmer’s possession. Palmer was known to Klimt’s contemporaries as a banker and General Direktor of the Österreichische Länderbank and he was renowned for being financial advisor to the legendary actress Katharina Schratt. That position earned him the regard of the Emperor, who is said to have granted him repeated private audiences at Bad Ischl and Schönbrunn Palace. The painting was rarely lent for exhibitions; it was last loaned to the Lower Belvedere in 2017 as part of the “Klimt and Antiquity: Erotic Encounters” exhibition. The “Altar of Dionysus” featured as a highlight of the show.

7. June 2022
16. May 2022
21. April 2022
20. April 2022
19. April 2022
21. November 2021
Search
Auctions
On the occasion of Oskar Werner’s 100th birthday, Dorotheum is…
We are all yearning for “standard time” at the moment,…
500,000 Euros in 5 Minutes Collectors and investors regard high-quality…
Legendary Austrian statesman and “Man of the People”, Bruno Kreisky…
“Property of a Noble European House”: These words delight jewellery…
Lawyer, farmer and painter, Werner Berg created art of international…
What does the Big Bang have to do with crypto…
The enfant terrible of Pop Art, Andy Warhol, admired Man…
Highlights
Destruction and beauty, politics and poetry are not mutually exclusive…
Aboudia is a big name in contemporary African art. His…
The enfant terrible of Pop Art, Andy Warhol, admired Man…
Take a look at the new Dorotheum Magazine! Spring is…
Categories
Recent Posts