BETWEEN HEAVEN AND EARTH

The colossal marble sculptures created by the Uruguayan artist Pablo Atchugarry blend the influences of classical works of art with a contemporary interpretation of the subject. The “Via Crucis”, a commissioned work created in close collaboration with his patrons and collectors, Enrico and Luciana Bonetti, is a case in point. It is to be sold in the Contemporary Art auction at Dorotheum on 27 November 2019.

“My paintings embody the quest for a way to live in harmony with oneself, with others, with nature, with the desire to overcome contradictions and conflict.” This is how Pablo Atchugarry, a Uruguayan artist living in Italy, describes his work. His sculptures are inspired by the floral and mineral properties that govern the laws of nature. They combine elegance and sensuality and bridge the gap between classical form and its contemporary expression.

Atchugarry’s sculptural work starts-out rooted in the figurative and develops towards ever greater simplification and stylisation, his pieces being characterised by their sculptural language and strong visual impact. The verticality of his sculptures and his skilful use of classical drapery, provide a curve that weakens but does not thwart the dynamic upward movement, and emphasise the function of his sculptures as a link between heaven and earth.

“Peeling off the layers of marble […], which is criss-crossed by an infinite number of gorges and abysses of darkness, to ultimately allow the iridescent purity of the stone to emerge, is almost a process of redemption that takes the spirit out of darkness and elevates it towards heaven. For this reason, admiring his works also enables you to sense the energy of creation in the mystical inspiration offered by sensual whiteness and disturbing depth.” (G. Folco).

Although Atchugarry’s art is expressed in a variety of materials, from bronze to gloss paint, his preferred medium is marble. Inspired by Michelangelo, the artist examines and scrutinises the material until he reveals the shape hidden in the stone. The light falling between the folds of the marble creates an interplay of reflections which enters into dialogue with his sculptures and emphasises their plasticity. 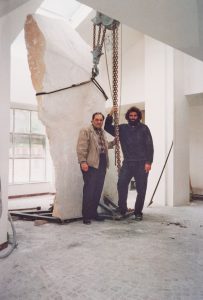 Atchugarry explains his own aesthetic world and, in particular, his discovery of marble, as follows: “I had my first opportunity to work with marble in 1979, and it was love at first sight. Marble is my preferred material, in all its four variations, which I like to call ‘brushstrokes of nature’: the white Statuario from Carrara, along with pink, grey and black marble from Belgium. I have also worked with bronze, steel and wood. In fact, a kind of dialogue is created between the material and the artist. It is not only the artist who chooses the material: the inverse also applies, with the material choosing the artist, guiding him through its beauty and imperfections. As Michelangelo stated, when I sculpt, I am guided by the idea that the artwork should simply be taken out of the block of material in front of me.”

The monumental sculpture “Via Crucis”, which Dorotheum will present at the upcoming Modern and Contemporary Art sale in November 2019, is made from marble. Pablo Atchugarry worked on it shortly after moving to Lecco, where he met the Enrico and Luciana Bonetti, who were art lovers and the first Italians to collect his sculptures. The couple commissioned the artist to create a large work on the theme of the Stations of the Cross. Work on “Via Crucis” began in the 1980s, but was not shown to the public until 1993, the year in which the Bonettis took possession of it. The work is the result of a long process, motivated by the bond of lasting friendship between the artist and his clients. The skilful interweaving of the lines and the unexpected development of its powerful mass reveal the artist’s mastery in shaping the material. This enables the great energy of the stone to shine through as strongly as the light of the silky smoothness of the white Carrara marble.

INFORMATION about the AUCTION

View now the auction catalogue and read our new myARTMAGAZINE!

9. April 2021
11. January 2021
20. November 2020
20. November 2020
18. November 2020
13. November 2020
Search
Sprachen
Auctions
An Aesthete’s Savoir-vivre Louis XV, Louis XVI, Marie Antoinette: his…
... and achieve the best price for your valuable works…
Brilliant Beauty A diamond ring by Bulgari: one of the…
The King of Jewellers Since its foundation in Paris in…
Enigma is probably the most famous encryption machine in the…
In the 250th anniversary year of Ludwig van Beethoven’s death,…
Rediscovery of the Human Figure Stephan Balkenhol is one of…
rigorous lines - many nuances - great refinement The influence…
Highlights
The Sacred in Everyday Objects ‘I’m a painter: I’m a…