We continue with myArt MAGAZINE’s regular literary series in which renowned Austrian writers are commissioned to write a new work, inspired by an object or artwork currently for sale at Dorotheum. In this issue, Franzobel has chosen a baroque painting, a still life by Ambrosius Bosschaert, as the focal point of a story in which he effortlessly manages to merge incompatibles – a hydrogen balloon and a fruit basket, the North Pole and the Netherlands, young love and old wounds – into a moving tale of life and death.

Juicy grapes, bursting almost, with the promise of sweet Tokay wine; an apple and a peach with unseemly, voluptuous cheeks; chaste pears dressed in delicate green, blood-red cherries and dewy-white plums. Lush life welled from the fruit basket in the canvas making Anna think, as she contemplated the painting, of her fiancé, who, along with two other men, was also to be found in a basket. A letter had arrived by pigeon. It said that Nils Strindberg, Knut Fraenkel and Salomon August Andrée had departed from Spitzbergen in their hydrogen balloon on July 11, 1897, two weeks before Anna’s 26th birthday, travelling to the North Pole. Travelling – the term the balloonists insisted on! – They were flying really.

Autumn had since arrived without word from Nils. Anna studied the flies and beetles on the painted fruit intensely, wondering if she would ever see her fiancé again. The expedition had been carefully planned down to the last detail; the balloon itself had been sown from fine silk in Paris; neckties, white gloves and subtly pink silk scarfs had been packed in confident anticipation of the splendid gala dinners awaiting the trio at the end of their adventure. 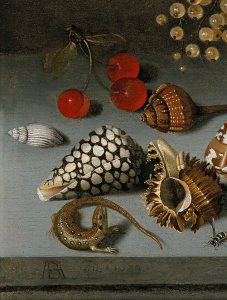 They had brought plenty of dollar bills and Russian roubles along, both, as it was impossible to predict whether they would land on Russian or American soil once they’d passed over the Pole. This much was, however, clear: Three weather-beaten Swedes were set to conquer the North Pole in a hydrogen balloon, drop a buoy mid-air with the message “We were the first ones here!” before drifting on towards world fame, admiration, and endless jubilation. They firmly expected the flight to take no more than 12 days.

There was no reason to start worrying before a full year had passed, Nils had said confidently, while his eyes were still strong. The return to civilisation from the high north might take a lot longer than expected – transport options were scarce up there he said.

Anna had had a bad feeling from the outset. She knew nothing of thermal physics or the analysis of air currents, but her dreams were haunted by grizzly images of a silk envelope painted white by frost, a basket covered in icicles, ropes and sandbags frozen stiff. She fretted that Nils and his companions would get stuck in the perennial ice with nothing but champagne and canned goods to sustain them. Maybe they had encountered “snowmen”, maybe polar bears. Maybe they had lost their minds. She had heard that the all-engulfing whiteness would turn people crazy, make them strip down to the naked skin and utter pure gibberish. Turn them into real basket cases. No, she told herself, Nils, Knut and Mr. Andrée had surely reached Siberia or New Foundland by now and were merely waiting for a whaling ship willing to offer them a lift back to civilisation and the glory that awaited them. She entertained the prospect of Nils’ jubilant return with some measure of trepidation. The expedition could indeed turn Nils into a real celebrity; important people would want to whisk him away to receptions, hang medals around his neck and give long winded speeches in his honour. Anna would sit meekly by his side and smile throughout. If truth be told, she felt no need to visit London, Paris or Berlin. She liked life in Stockholm.

And what about the Eskimos? She had asked Nils if it was true that the ice men lead depraved and sinful lives and swapped women between them as they saw fit. “Don’t you worry yourself with that” he had answered with an adventure-drunk smile on his face. He had been gone six months now, and Anna, who generally had a poor sense of time, yearned for news of his return. More and more often she would stand by the window, and anxiously await the arrival of the postman as she studied the still life of the fruit. It was a Swedish-made copy of the Dutch original. The original was in a museum in Utrecht or Madrid or Florence or something like that. Anna enjoyed the painting, nonetheless. The original had been painted sometime during the 30 Years War. All over Europe people had been busy cracking each other’s skulls over minute theological differences, but in the Netherlands, someone was painting a basket of fruit. Snails, clams and nuts had been placed at the forefront of the painting; a lizard stretched its neck in a threatening gesture. The canvas brimmed with life, with abundance, and yet on closer inspection it turned out that the insects were gnawing away at the fruit. Was it a symbol of their young love? Or the portrait of a historical point in time?

Travelling is a constant quest to confirm expectations. But what about the North Pole? What can you expect? What has humankind to gain from visiting that place?  To Nils the grapes were too glossy, the cherries too red. Everything he saw made him yearn for the hydrogen-filled silk. “When I reach the North Pole we will earn enough money to buy the original painting” he had said. Nils Strindberg! You are every bit as mad as your great uncle, Anna had laughed.

Winter came and went, but alas, the Spring sun brought no news of the explorers. Could something have gone wrong? No, Anna wouldn’t allow herself to even think the thought. Nils’ parents made no mention of the possibility either. Over dinner they would discuss things like the Dreyfuss affair, the automobile and its growing popularity, an Italian anarchist’s lethal stabbing of the Austrian empress or the upcoming turn of the 19th century. Another recurring theme was Nils’ famous great uncle. Word had it that the ageing playwright and novelist was suffering from hallucinations, spoke to ghosts and basically was, in layman terms, completely off his rocker. 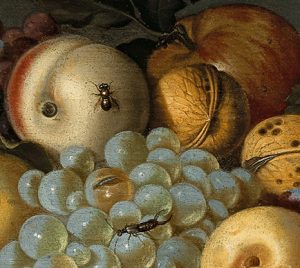 But what about the balloon? Even if no one said it out loud, Anna knew. By the time the turn of the century rolled around, the last shred of doubt had left her mind. She knew: Nils wasn’t coming back. Ever again. Insects were gnawing away at the fruit. At some point rot had set in, and the balloon…it had…crashed?

Anna focused her entire attention on practicing the piano, and in 1902, when the opportunity presented itself to emigrate to Switzerland, she took it. Anna asked the Strindberg family if she may take just one item with her when she left: the painting. Six years later, she married a suitor and moved with him to America where first Cook and then Perry were celebrated as the conquerors of the North Pole. In all the exalted media reports that followed their accomplishments, the three vanished Swedes were never mentioned, not once.

When World War I broke out, Anna was playing Bach at a concert in Sarasota. On the day of the big crash on Wall Street, she was playing Beethoven in Baton Rouge. Her husband was a loving and sensitive man, and even though she never spilled a word about her first love, he could sense that a dark shadow lurked in there behind her somewhat large snub nose and her radiant eyes. Homesickness, he figured. He feared that if she ever set foot on Swedish soil again, she wouldn’t ever want to leave again. The dreaded moment arrived in 1930. Anna spent two weeks on the island of Gotland, visited Uppland and was sitting in a Stockholm coffee shop at Stockholm’s Gamla Stan when she stumbled across a note in the “Aftonbladet”: the remains of the three Swedish balloonists had been found on an uninhabited island near Spitzbergen – tents, skeletons, monogrammed silk handkerchiefs, cooking utensils. Anna mentioned it to no-one. She did not even attend the funeral; all she did was send a wreath.

At first, she refused to even read the letters from Nils that had been recovered on the island. Once she did, however, once she learned about the wet socks, the unbearable cold and the pain he endured, and about, not least, the great love he felt for her during this horrible time, she went straight to the first and best registrar to have a notarized entry added to her will. It requested that her heart be removed after her death and buried in the Swedish cemetery next to Nils. Her beloved painting too was to follow her heart to the grave. In 1949, Anna eventually died, and her instructions were carried out exactly as requested. Anna had often sat in front of the fruit basket painting thinking of Nils Strindberg, who had so deeply longed to see the North Pole, not because the juiciest grapes grew there, but simply because it was there to be seen.

He was born 1967 in Vöcklabruck as Franz Stefan Griebl, lives and works in Vienna, Austria. His artist name is derived from the first name of his father, Franz, and the maiden name of his mother, Zobl. He was active as an painter until 1991. For his prose he has been awarded the Ingeborg Bachman Prize in 1995, the Arthur Schnitzler Prize in 2002 and the Nicolas Born Prize in 2017. His latest novel,
“The conquest of America”, published 2021, was long-listed for the German Book Prize. Franzobel is also the author of numerous stage scripts, which have been translated in
23 languages and are played all over the world.

Read now the new myART MAGAZINE and browse through the online catalogues!