We are all yearning for “standard time” at the moment, and the good news is…… it is up for sale! A rare Viennese Cube Clock will be offered at the Design sale at Dorotheum 17 June, 2022. 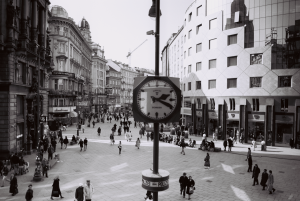 The Viennese Cube Clock was designed for the City of Vienna at the beginning of the 20th century. Designed and manufactured by the Vienna City Planning Department, with the Ing. Emil Schauer company, the first Cube Clock was installed in 1907, attached to a streetlight, at the crossing of Opernring and Kärntner Strasse in the centre of Vienna. The innovative design of the clock attracted widespread attention. The clock case was octagonal with bevelling at the corners and instead of the usual numerals, the clock face, which is now patented by entrepreneur Christoph Stein, featured dots and dashes in the place of numbers.

Over time, the Cube Clock became an icon of urban design and a popular meeting place wherever it was situated. A classic piece of street furniture, it presented standard time – or “normal time”, as it was officially called – at 73 locations in the city for more than 100 years, including Vienna’s Stephansplatz.

In 2007, Vienna’s Cube Clocks were replaced with a new design. The dismantled clocks were bought by the Lichterloh company, which went on to restore a number of them. Twelve Austrian artists (including Brigitte Kowanz, Gelitin, and Judith Fegerl) were commissioned to work on a project involving the Cube Clocks for an exhibition to mark the company’s 20th anniversary.

Design aficionados and those nostalgic about standard time can bid on a historic example of the Cube Clock, (converted into a floor clock, equipped with LED lighting), at Dorotheum’s Design auction on 17th June 2022. The clock being offered for sale is a 1920s model with a domed top which allowed rainwater to run off more effectively. The more flattened topped models appeared only after 1926. The construction, which is more than one cubic metre in size, consists of sheet iron and acrylic glass, as well as other materials. The clock sits on hard rubber rollers to facilitate moving around. Its weight is around 100 kilograms.

Mathias Harnisch is a Design Specialist at Dorotheum.

14. June 2022
20. April 2022
11. November 2021
21. July 2021
11. July 2021
22. June 2021
Search
Auctions
On the occasion of Oskar Werner’s 100th birthday, Dorotheum is…
We are all yearning for “standard time” at the moment,…
500,000 Euros in 5 Minutes Collectors and investors regard high-quality…
Legendary Austrian statesman and “Man of the People”, Bruno Kreisky…
“Property of a Noble European House”: These words delight jewellery…
Lawyer, farmer and painter, Werner Berg created art of international…
What does the Big Bang have to do with crypto…
The enfant terrible of Pop Art, Andy Warhol, admired Man…
Highlights
Destruction and beauty, politics and poetry are not mutually exclusive…
Aboudia is a big name in contemporary African art. His…
The enfant terrible of Pop Art, Andy Warhol, admired Man…
Take a look at the new Dorotheum Magazine! Spring is…
Categories
Recent Posts