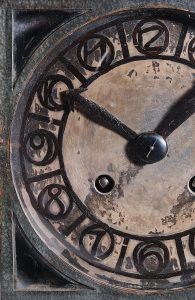 In a letter to Josef Hoffmann, the Scottish founder of the Arts and Crafts movement, Charles Rennie Mackintosh, wrote of the Wiener Werkstätte: “If your programme is to achieve artistic success (and artistic success must be your first aim), then every object you produce must have a strong mark of individuality, beauty and outstanding workmanship.”

This was both exhortation and encouragement, and it became the leitmotif for Koloman Moser and Josef Hoffmann alongside with their own high standards for the quality of their work. The clock offered at Dorotheum’s upcoming Art Nouveau auction was designed in 1903, the year in which the Wiener Werkstätte was established. Only two such pieces made, and the clock’s unique design is as much a nod to traditional language of form as it is herald of a new, modern era.

The clock’s architectural structure – with four alabaster pillars on either side – is where the Viennese Biedermeier meets a new modernism which had emerged in Scotland even before the Wiener Werkstätte had been founded. The founding concepts of the Arts and Crafts movement, which produced Gesamtkunstwerks of architecture and design, reveal a simplicity and clarity which can also be observed in the early Wiener Werkstätte. The hammered copper surface of the clock exudes high quality and robustness; the arched, roof-like superstructure with an oval in the centre and a central, oval gemstone, is a witty reference of the designs of the like-minded Scottish artists.

The influence was mutual: Hoffmann’s clock demonstrates that the Wiener Werkstätte was the herald of an avant-garde style which influenced Mackintosh’s later clock designs: the clockwork, hands and face of Hoffmann’s elevated clock “façade” rest upon slender, free-standing columns, which can also be found in Mackintosh’s later time pieces.

So how could Hoffmann have responded to Mackintosh’s exhorting encouragement? For one, he might have written, with absolute conviction, that the Wiener Werkstätte had fully achieved the Scotman’s ambitious vision of quality combined with tradition and elegance.

7. June 2022
4. December 2020
18. November 2020
9. July 2020
25. May 2020
4. December 2019
Search
Auctions
On the occasion of Oskar Werner’s 100th birthday, Dorotheum is…
We are all yearning for “standard time” at the moment,…
500,000 Euros in 5 Minutes Collectors and investors regard high-quality…
Legendary Austrian statesman and “Man of the People”, Bruno Kreisky…
“Property of a Noble European House”: These words delight jewellery…
Lawyer, farmer and painter, Werner Berg created art of international…
What does the Big Bang have to do with crypto…
The enfant terrible of Pop Art, Andy Warhol, admired Man…
Highlights
Destruction and beauty, politics and poetry are not mutually exclusive…
Aboudia is a big name in contemporary African art. His…
The enfant terrible of Pop Art, Andy Warhol, admired Man…
Take a look at the new Dorotheum Magazine! Spring is…
Categories
Recent Posts