This mercedes was a show car in the London Motor Show in 1960, spent 40 years with a single Austrian owner and has survived in exceptional condition, without any restoration!

On June 23rd, 2018, this Mercedes-Benz 300 SL Roadster will be for sale in the Classic Cars auction!

The Star of the Street

The 3 litre engine of the 300 had great potential, and could actually get up to 170 hp. Since the aggregate was heavy, the shell had to be light. A network of tubular frame was formed around a streamlined aluminum body. Conventional doors would have taken stability away from the design, and the solution to the problem gave the 300 SL the same characteristics that everyone knows today – its gull-winged doors.

Success on the Track was Swift 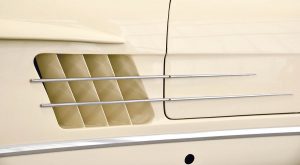 Whether Mille Miglia, Carrera Panamericana or Le Mans started the race, they usually won driving the 300 SL. The 300 SL Roadster debuted in 1957, and replaced the coupe. The Roadster was more expensive than the coupe, but also more successful.

This 300 SL Roadster began its car-eer with a grand entrance. It was a showpiece for the 1960 London Motor Show, which took place between October 19 and 29, 1960. The completion of the car was scheduled for September, but on October 14 there was an additional request to the production order, which would give the Roadster its final look: Disc wheels with a chrome-plated bowl and highly polished rims. It was finally ready to shine! 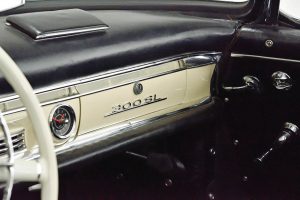 The instruments were provided with English labels, nameplates were attached to the front and rear, but without its year of production. Even under the hood, the 300 SL was allowed to shine. Engine, units and body were decoratively prepared.

In order to In order to flaunt and accentuate the Roadster’s timeless elegance, it was complemented with a hardtop lined with white faux leather. A convertible soft-top was left out to begin with, prior to the presentation, somehow fashioning a new take on the Coupé.

However, after ten days of display, the Roadster was put under work once again. For good reason, since building one of the most expensive Cabriolets without a convertible rooftop would’ve made for an unprofitable investment.

…The Roadster arrives in Austria

In 1976 an Austrian businessman bought the Roadster form a German car-dealer. He kept the 300 SL for upto 40 years, fostering and maintaining its original essence and never putting it through full-restoration, minor refinishing and repairs of small damages excluded. On the whole, this 300 SL Roadster is primarily in its original state!

Just recently the Roadster underwent an all-round service, especially since it had only experienced sporadic appearances on the road. This included repairs on the Injection pump by a specialist.

A Mercedes 300 SL in itself is a unique model – a legend perhaps. The ultimate original character of this Roadster here definitely makes it one-of-a-kind.

Another highlight from the upcoming Classic Cars auction is the BMW 327/28 from 1938 – Read more here.

2. October 2019
4. July 2019
4. June 2019
27. November 2018
5. June 2018
10. October 2017
Search
Auctions
An Aesthete’s Savoir-vivre Louis XV, Louis XVI, Marie Antoinette: his interest…
... and achieve the best price for your valuable works…
Brilliant Beauty A diamond ring by Bulgari: one of the…
The King of Jewellers Since its foundation in Paris in…
Enigma is probably the most famous encryption machine in the…
In the 250th anniversary year of Ludwig van Beethoven’s death,…
Rediscovery of the Human Figure Stephan Balkenhol is one of…
rigorous lines - many nuances - great refinement The influence…
Highlights
The Sacred in Everyday Objects ‘I’m a painter: I’m a…