Three brothers, a financier and a pioneering spirit at the end of the 19th century – those were the ingredients for the automobile manufacturer Gräf & Stift in Vienna. A VK 7/20 hp enters the race at the Dorotheum auction on 19 October 2019 as part of the Classic Expo in Salzburg. The car is one of the last survivors of this mid-range model built in 1920.

The cars of yesteryear have many a story to tell – their own, but also stories of their times, their drivers and their builders. In the case of this car offered by Dorotheum, we begin with its creators at the end of the 19th century. Driven by the Zeitgeist and pioneering spirit of their time, three Viennese brothers – Franz, Heinrich, and Carl Gräf –
presented their first horseless carriage in 1897. The ‘horsepower’ now came from a water-cooled four-cylinder engine, which was, in today’s terminology, state of the art. The brothers demonstrated their talent once again the following year with the world’s first front-wheel drive. In 1901, a financier and patron was found by the name of Wilhelm Stift. From then on, the automobiles were called Gräf & Stift. Their mascot was a lion, and their home was Döbling, Vienna.

As a pioneer in technology, Gräf & Stift was considered a premium brand from the beginning. Of course, very few could afford such luxury in those days. The lucky ones included the Imperial family, the Mayor of Vienna, and a few rich members of the public – very few indeed. 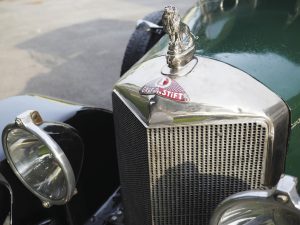 On 28 June 1914, a Gräf & Stift automobile was involved when disaster struck. The heir to the throne, Archduke Franz Ferdinand, and his wife Sophie died in Count Harrach’s car. International events took over. In Döbling, they started to build military equipment and in particular, transport lorries and buses. It was not until 1920, that civilian transport was to take off again and when it did, it was with the first launch of a car
for the middle class: the VK 7/20 hp.

Contemporary advertising never tired of emphasising that the “small city car” was just as good as its luxurious predecessors, simply a little smaller. The following year, Gräf & Stift was fully operational again and returned to its roots, the luxury class.

One of the last surviving VKs is now to be sold at auction. Its story begins in 1922. It was initially part of the company’s private fleet. While most VKs were phaetons (fourdoor, multi-seat convertibles), this one has a detachable roof for the passengers in the back. The window separating driver and passengers and the intercom suggest that it was driven by a chauffeur. In 1924 the car changed hands and went into service at Gebrüder Stollwerck AG’s factory in Vienna. Five years later, its managing director, Alexander Russbacher, became the owner of the car, but bequeathed it (not entirely voluntarily) to Mrs. Olga Russbacher only two years later. The VK survived both the war and its latest owner and changed hands again in the late 1960s.

A young engineer took on the task of restoring the venerable car to the condition of its glory days. Many bills and correspondence provide a detailed testimony to the quantity of heart, soul and money invested. Despite numerous setbacks, he brought the Gräf & Stift back onto the road and preserved it for posterity, along with all its papers and stories, from the first day to the present.

INFORMATION about the AUCTION

Information: Wolfgang Humer is a specialist in Classic Cars at Dorotheum

View now the auction catalogue and read our new myARTMAGAZINE!