When Archduchess Marie Valerie of Austria commissioned the imperial court jeweller Köchert to create a wedding diadem for her daughter, the events of the First World War had already cast a gloomy shadow over the Austro-Hungarian empire.

The wedding announcement of Count Bernhard of Stolberg-Stolberg to Archduchess Hedwig of Austria-Tuscany was placed in the newspapers amidst wide coverage of war events; news about the imperial wedding was restricted to a mere column. 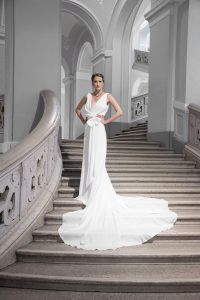 A small wedding ceremony was held on April 24th, 1918 at Schloss Wallsee in Lower Austria, with close family in attendance. Emperor Karl and Empress Zita were unable to attend; instead, they sent a representative.

Both Noble and Practical

The wedding present from Archduchess Marie Valerie to her daughter is a subtle reflection of the events of the time. The modest though elegant diadem consists of seven divisible pieces. Together, they make a broad headpiece featuring three diamond bows.

When designing this piece of jewellery, Köchert combined designs he had previously used for bracelets, necklaces and brooches between 1890 and 1895.

The strict navette-shaped symmetry is contrasted by the playful bows. Its general appearance is not particularly flashy and bold, but nevertheless a crowning glory. 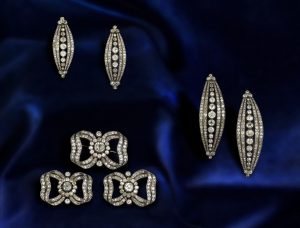 All seven pieces can be worn as individual brooches!

The tools necessary to separate the diadems’s seven pieces are perfectly preserved in their own specially made case.

The diadem’s ability to transform into brooches offers its wearer numerous possibilities: for example, the individual pieces can also be used to embellish an updo!

The historical background of this diadem is particularly intriguing. The period, the circumstances and provenance, all contribute to its unique story. The diadem is a piece of Austrian history!

Another remarkable aspect of this headpiece is its excellently preserved condition, as well as its accessories. Handwritten cards by Countess Hedwig of Stolberg-Stolberg attest to her great fondness of this particular auction item. 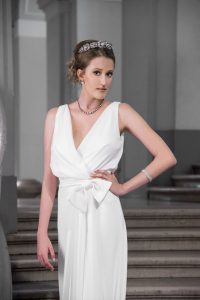 Do you have questions about this wedding diadem?

22. November 2020
12. November 2020
29. May 2020
19. May 2020
20. April 2020
8. April 2020
Search
Sprachen
Auctions
Brilliant Beauty A diamond ring by Bulgari: one of the…
The King of Jewellers Since its foundation in Paris in…
Enigma is probably the most famous encryption machine in the…
In the 250th anniversary year of Ludwig van Beethoven’s death,…
Rediscovery of the Human Figure Stephan Balkenhol is one of…
rigorous lines - many nuances - great refinement The influence…
THE POETRY OF THE SIGN Oscillating layers of colour, rows…
DUTCH TENDENCIES Jan J. Schoonhoven was a co-founder of the…
Highlights
The Sacred in Everyday Objects ‘I’m a painter: I’m a…